Webperformance launched for Spartoo, a specialist in the online trade of brand-name shoes, a new typology of Direct Email Marketing campaign, called “click-to-lead”. 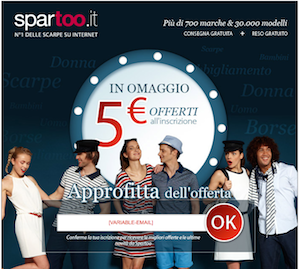 It is a hybrid between a DEM cost-per-click campaign and a performance-based pay-per-lead campaign, aimed at the collection of email addresses.

The distinctive feature of the campaign, which is also the key to its effectiveness, lies in the extremely simple and immediate purchase process: DEM messages, in fact, include a pre-filled form featuring the email address of users, who can submit their data with only a click.

Spartoo operates in over 20 countries, such as France, Germany, the UK, Spain and Italy, generating more than 14 millions of unique monthly visitors only in Europe.