2014 started off with the launch of a new campaign for Meetic, one of our customers as well as one of the largest singles communities in Italy. 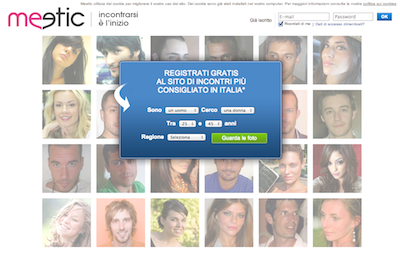 In-game Advertising applies to online games and social networks. It works as follows: users who are playing must fulfil certain actions. To this end, they need different goods throughout the game. To get these goods they can, for instance, do swaps with other players, or use credits. To gain credits, they can either buy them by credit card or benefit from the commercial offers advertised on a dedicated “Offer Wall”.

It is through the Offer Wall that the Meetic campaign integrated into the social gaming activities. During the game, therefore, users could choose to benefit from the Meetic offer to get some credits. To do that, they only needed to click on the ad and, after being redirected to the Meetic landing page, enter their data in the form. This allowed users to gain new credits to go ahead with the game and Meetic to collect new leads.

This In-Game Advertising campaign recorded very good results – so much so that we are planning to launch a new one for Meetic, aimed at collecting subscriptions to the service. Players who will subscribe will get more credits than those who will just register.