This month we have launched a DEM campaign to promote WEB PRO ID, a research project aimed at fighting online identity crimes. 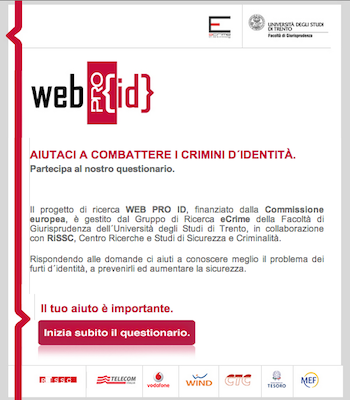 The project is financed by the European Commission, and run by the eCrime research group of the Law Faculty of the Trento University in collaboration with the RISSC (Centro Ricerche e Studi di Sicurezza e Criminalità).

Users are asked to answer a questionnaire abour identity crimes, as to make their own contribution to the research. The obvious purpose is to gain a deeper knowledge of the problem, as to prevent it and enhance security. Those who accept to take part in the survey and click on the “Start the questionnaire” button are redirected to the landing page dedicated to the actual questionnaire.

Before launching the campaign, we have realised two different DEM samples, and have run an AB test, as to check out which one recorded the higher rates in terms of openings, clicks and conversions. The best version was then used for the actual campaign.

This pay-per lead, performance-based campaign took into account as valid those leads for which the consent to the processing of personal data was given and the questionnaire was completely filled out.

The campaign targeted users over 18, selected from databases with active users on the web, such as Firmiamo.it, the world’s most important website for the creation of petitions dedicated to the main topics of social interest.

The campaign was very successful: in less than 10 days we have used the whole budget available, much to our customer’s satisfaction. The campaign recorded a 30% conversion rate.