A few days ago, we have launched an online campaign for our customer Belvedere SPA, a Tuscan enterprise which since 1997 has been dealing with the development of the local territory. 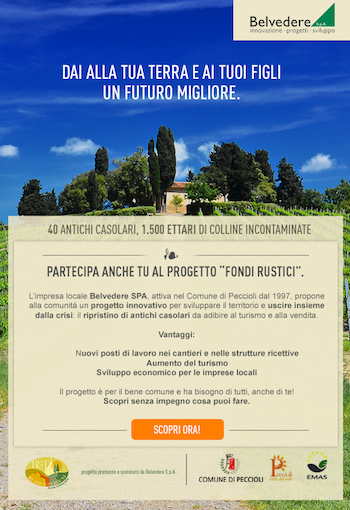 Its main activity, which takes place in the Peccioli municipality, consists in waste disposal and in the production of alternative energies, that earned it the EMAS certification and contributed to the conferment of the orange flag by the Italian Touring Club.

The company also engaged in the innovative project “Country Estates, a major common heritage”, aimed at refurbishing ancient farmsteads destined to host tourist or selling activities. The ultimate purpose of the project is to relaunch the territory and the local economy.

For the promotion of “Country Estates”, we selected our target audience among people living in Pisa or in the Pisa province, carrying out a DEM campaign featuring a dedicated landing page and a geo-targeted facebook campaign with an online banner ad, which is going to last until April.

The DEM message shortly illustrates the initiative of Belvedere SPA, inviting users to click on a link for further information. The link redirects them to the landing page, which provides more details about the project and features a form that users can fill out to be contacted by the company.