UniCredit, one of the main financial services companies in Europe and a leading bank in Italy, entrusted us with the launch of two campaigns, called “Conto Super Genius” and “Genius Card”. 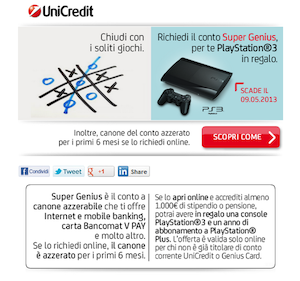 The former, which stayed online until May 9th, was a Direct Email Marketing campaign, remunerated on a CPL basis. The campaign featured a big incentive: a PlayStation 3 was given as a free gift to all the users who opened this type of account.

Webperformance is currently working on the launch of a DEM campaign for the “Genius Card” prepaid card: the campaign will include two advertising plans and two landing pages, targeted at two different groups.